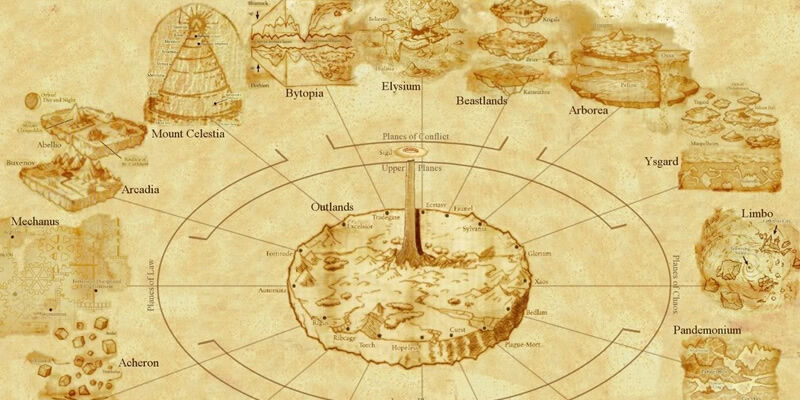 The D&D universe is typically composed of multiple planes, organized in some fashion. The default layout is referred to as "The Great Wheel", which has the material plane (where most "normal" life is found) at the center, and surrounded by and coexisting with various other planes. The inner planes compose the building blocks of the universe, and further than that are the domains of the gods. They are all more or less connected by the Astral Plane (which exists between the planes), and outside of it all lies the Far Realm.

In this cosmology, there was an event that shattered the fabric of the universe. This allowed for alternate realities to bleed in, further weakening the fabric of reality. The structure of this cosmology is roughly the same as the Great Wheel, though there are several new planes such as the Elemental Plane of Cold and Elemental Plane of Wood. Alternate realities brought with them new deities, who formed new pantheons with the existing gods.

In this cosmology, following the events of the Sundered Cosmology the deities have all perished and their domains were lost. The souls of the dead who composed these planes were lost to the great unknown, and communication with them is nigh impossible. There are no longer any true outer planes, though fragments are known to exist floating throughout the Astral Plane (as do the corpses of the former gods). Only the strongest of the outer planes, (the Abyss, Arborea, Baator, Celestia, and Mechanus) have remained mostly intact, but even they no longer harbor the souls of the dead. They cannot be Plane Shifted to, and barring higher magics must be traveled to through the Astral Plane. Furthermore, the material plane has collided with other alternate material planes.