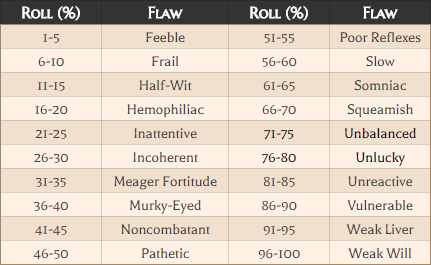 A "Flaw" in game terms is sort of like a "negative feat", in that it provides a penalty or otherwise hindrance to the character who has it. Characters are permitted to take up to two flaws at level 1. They must be rolled for as per the table. If at any point your character becomes immune to the effects of a flaw you have (such as becoming undead renders you immune to poison) you must re-roll a new flaw to replace it.

Each of the flaws described here has a specific game effect. Some flaws can only be taken by a character who meets a special requirement.

Feeble - You are unathletic and uncoordinated.

Frail - You are thin and weak of frame.

Half-Wit - You're not the sharpest crayon in the shed.

Hemophiliac - Your blood has trouble clotting. If you are ever wounded (take hit point damage from an attack, fall, trap, or otherwise have your skin punctured) you do not stop bleeding.

Inattentive - You are particularly unaware of your surroundings.

Incoherent - You have trouble speaking, your tongue twists terribly and your words tend to come out a garbled mess.

Meager Fortitude - You are sickly and weak of stomach.

Murky-Eyed - Your vision is obscured.

Noncombatant - You are inept at combat.

Pathetic - You are weaker in an attribute than you should be.

Poor Reflexes - You often zig when you should have zagged.

Somniac - You need inhuman amounts of sleep to function properly.

Squeamish - The sight of blood makes you physically ill

Unbalanced - Something is wrong with your inner ear, and you tend to fall a lot.

Unlucky - Perhaps your ancestors conceived you under a ladder on a crack in the pavement while opening umbrellas indoors as a black cat passed them, but either way life tends not to go your way.

Unreactive - You are slow to react to danger.

Vulnerable - You are not good at defending yourself.

Weak Liver - Your friends call you a lightweight, you can barely keep down your liquor, let alone poisons

Weak Will - You are highly suggestible and easily duped.